Where we bought it: Sam's Club, Grand Junction, Colorado

Interesting Vendor Story: Nope, not this time. It's the flour you get at Sam's Club. It's everywhere.

Our first impressions : We've used it before and always wondered how good it really was. But, it was bread flour, and it was cheap, so we kept using it. Now we'll find out just how good it is.

It's both enriched and bleached, which we have become more and more leery of over the past few years. Also, we were very surprised that a bread flour would have only 10% protein. That's quite low for a bread flour, though not too low to make bread with. Looking further into the contents of the flour, we found it contains malted barley powder and ascorbic acid. These should help the browning of the bread and the workability of the dough.

We were also surprised the mill's name wasn't on the bag, and that there was no web site to point to. Our guess is it's made under contract to the distributor (Sam's Club), and that as a result this flour's characteristics may vary depending on which part of the country it was made in. Still, that's not a fatal flaw... even if you buy flour direct from a family owned farm and mill, there will be seasonal changes.

Any special reason we're testing this flour: It's everywhere in the USA and all bakers seem to use it at some time or another, so we thought it would be useful to aspiring bakers to test it to either praise it or pan it.

How'd we screw up the tests this time? Amazingly enough, we didn't. Everything went well.

Conclusions - the flour had more tenacity and stick-to-itivness than I'd have expected from a 10% protein flour. It handled nicely and rose well. However, all the breads we made with this flour were quite bland, so it isn't one of my favorites any longer. Sorry Sam, wherever you are.

together by the Baker's and Chef's flour. The flying crust suggests I should have added some more water to the dough to increase its hydration, and that I should have slashed the crust before baking. The bread had a very tight crumb, dense and moist. The crust was firm, chewy, and thick, ranging from 1/4" - 3/8" (6 - 10mm). The Baker's and Chef's bread flour let the salt, rye, and caraway tastes of the bread come through. The bread had a very pleasant after-taste that lingered on one's palate. This bread stands on it's own as a good bread, and it will work as the base for a robust sandwich.

Ciabatta is a fun bread and one of our favorites.

Made with Chef's and Baker's Bread Flour, this ciabatta was the picture of what a ciabatta should be. It retained its slipper shape, rose nicely, had a beautiful open big-holey soft crumb that absorbed 47 times its weight in Olive oil, and had a nice crust. Even the crust color was just so. The crust was nice and crisp, and had a lovely slightly caramelized taste to it. However, the crumb was very bland. It didn't get in the way of the olive oil we dipped it in, but it also let the flaws in the oil shine through. (I need to start buying better olive oil for dipping!) There was very little wheat or sour taste, and in the end taste is what it's all about.

Simple Sourdough Pan Bread - at its best, this bread is a 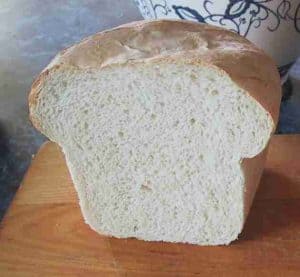 orchestra of sourdough taste. However, made with Sam's Baker's and Chef's bread flour, it's more of a string quartet. The bread had a nice open crumb with medium sized holes in it. The crumb was very soft - soft enough that the bread sliced more easily on the third day after baking than on the day it was baked. The top crust had a nice color and texture, while the side and bottom crusts were too light and too flabby. The bread had a nice sour aroma, but the sour didn't carry very far into the taste. The bread was very bland, with a somewhat short sour aftertaste. The bread is light enough that it works well for breakfast or other light sandwiches. It really doesn't stand up very well on its own as an eating bread, though it did make awesome grilled cheese sandwiches. Oddly enough, the bread delivered a very impressive oven spring, increasing its height by about 2 inches in the oven. This is very unusual for this bread - perhaps I should have let it rise a bit longer.

Three stage French bread should be a rich, complex bread

bursting with wheat and sour tastes. The taste of the bread should evolve and develop for a week after baking. French people debate when the bread is at its peak, with many people preferring it on the third day after it is baked. This version of that bread had a nice regular crumb with some pleasingly big holes in it. The aroma had more wheat than sour in it, but little of either. The crust is quite firm to the tooth, shearing rather than cutting. The crust has a nice slightly caramelized flavor to it. The crumb is soft and bland. This is a good sandwich bread for bland sandwiches, but the bread doesn't really stand on its own. There is a residual sour taste, not in front of the palette. All in all, it's good, but it's not great. A good shot of whole wheat flour would have helped this bread a lot!

Hydration Pictures As discussed, we took pictures at 60, 80, and 100% hydration. Chef's and Baker's Bread Flour was very tenacious, remaining sticky until it was well kneaded. It stuck to the bowl of the mixer for most of the ciabatta mixing time. At 80% hydration, it was a sticky workable puddle, but a sticky puddle none the less. The dough remained moist, even at 60% hydration, allowing seams to be sealed easily. It was a very pleasant flour to work with - if only it had delivered more flavorful breads.