This is from "The Friends of Carl", a group dedicated to giving away Carl Griffith's ancestral sourdough starter.  I 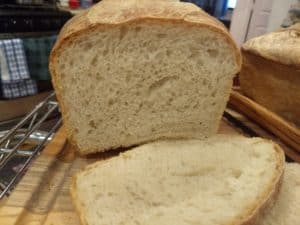 We talk about them at some length in "Getting a Good Starter" page.

This bread is a good learners loaf, and it is the first loaf I baked that was nicely sour!  It also is a nice soft sandwich loaf which many people have been asking for.  I especially like that that author talks about what to look for at each stage of the process.  The original recipe was here.  Given how things change online, I thought I'd copy the recipe to this page with minimal editing.  Many thanks to The Friends of Carl!

Put into the mixing bowl:

For the final dough, mix in:

Machine knead about 10 min. at low speed while adjusting consistency by adding about:

until the dough no longer sticks to bowl or fingers.  This could take more, or less, flour than is called for depending on the condition of your starter and the flour you are using, so add the flour a bit at a time.  In two recent bakes the amount of flour was 1 1/3 cups and 1 2/3 cups (160 and 220 grams). What is important is the condition of the dough, not using the exact amount of flour called for in the recipe.

Remove the dough from the mixer and hand knead it briefly, then split the dough into two dough balls, each of which will be a separate loaf.  Work in more flour while hand kneading each piece.  This could be as much as:

I also bat each piece around in the bowl with the dough hook, at medium speed. Bat one dough ball while kneading the other, repeat twice.  While this is not something KitchenAid recommends, it works well.

Form and reform each piece into a ball several times during 20 or 30 minutes, otherwise keeping them covered.

Place in pans, allow to rise 5 to 8 hrs. at room temperature, enclosed to retain moisture (Mike uses shower caps or processing caps available from beauty supply stores), until the top of the loaf is an inch or two higher than the top of the pan.  Three inches above the pan is possible!  Bake for 40 min. at 375°F/190C.  The rise times are approximate, for a 70F/21C room.  Rise times will be longer in cooler rooms, shorter in warmer ones.  Because of the long rise time, expect little to no oven spring.

We used Teflon-coated steel pans, with about a two quart capacity when filled to the brim.  You might fill your pans with water, and then measure how much water you used.

-Modified from a recipe at  CarlsFriends