The WhisperMill ushered in a new generation of home grain mills, called micronizer mills. Instead of using stones or steel rollers to crush the grain, they use high speed steel disks spinning at 45,000 rpm or more. When grain hits the whirling disks, it just explodes into flour. Some people love micronizers, 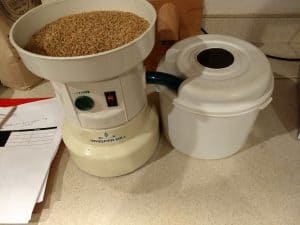 but others think they make inferior flour. Let's see what we think, OK?

While the model I have is no longer being made, similar models are being sold under the names WonderMill and NutriMill.

As mentioned in the main article and above, this is a micronizer mill. It works by spinning two plates at high speed and when grain hits the wheels it is instantly pulverized. The WhisperMill can be easily broken if it is started with the hopper full of grain, or if it is stopped before the hopper is empty. In brief, start the motor, add the grain, when all the grain is milled, stop the motor. Also, if you get some grain that hasn't been well cleaned, a stone in the grain can destroy the spinning discs. It pays to not use cheap grain in these mills.

Two areas where this mill excels were lack of dust and speed. The milled flour is sent to the sealed white container to the right of the mill through the green tube. There is an air filter on the top of the catch container. All in all, little dust is created. This mill ripped through our 1,300 gram test milling in under 3 minutes, which was, by far, the shortest time.

Adjustment range - the WhisperMill adjusts from very fine to fine. If you need to crack grains, this is NOT your mill.

While this is called a whisper mill, it wasn't notably quiet. It made 82db of noise, which is on a par with the KitchenAid. However, where the KitchenAid made lower pitched and "grindy" noises, the WhisperMill made higher pitched noises, but for less time. My wife found this somewhat less annoying than the KitchenAid grain mill. When the WhisperMill starts and stops it sounds like a jet engine winding up or down. However, it won't be noisy for long! Some people maintain that this sort of mill produces flour with less damaged starch than stone or roller mills, and that leaves less food for the yeast which makes for inferior bread. All the bread recipes at their no longer available web page featured breads with eggs, milk powder and other flour improvers. Good flour doesn't need improvers to make good bread. The breads from the corporate recipes were more like cake than bread. All this made me wonder about the quality of the flour. So, how did this mill fare in our tests?

Now, let's look at particle sizes. The flour particle size was considerably smaller than that of the KitchenAid, but that didn't translate into a markedly better rise. In fact, the bread made with flour from the WhisperMill had worst rise and crumb structure of any of our test loaves.

Please note that there were losses due to flour stuck in the sieves, so we didn't get 1,300 grams of flour through the sieves. 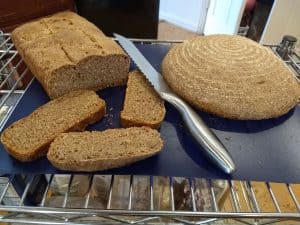 It's a toss up between the KitchenAid and the WhisperMill as to which produced the least risen loaves. These are the 100% whole wheat loaves.