Part of the Big Flour Test

Where we bought it: Gunnison Vitamin and Health Foods

Interesting Vendor Story: Arrowhead Mills has been around for about 40 years, and was one of the first "whole foods" companies. They produce a wide range of organic cereal and grain products. They are based in Hereford, Texas, in the Texas Panhandle. Locals like to say that the weather conditions are extreme, and while not much grows there.... if it manages to grow there, it's healthy!

Our first impressions: It's a fairly coarsely ground flour, like a coarse whole wheat.

Any special reason we're testing this flour: We've heard that Kamut is healthier than wheat, so we wanted to try it. We are happy that Arrowhead Mills is honest enough to admit that Kamut is an ancient wheat. It's not a wheat substitute, it's wheat. We mention this because VitaSpelt continues to promote Spelt as if it were not wheat.

How'd we screw up the tests this time? It went well, for a change.

Conclusions: We liked the Kamut flour well enough, and interestingly, the taste of the breads continued to develop after our tasting. We wound up liking several of the breads much more two days later than we did at first. Still, $1.50 a pound is a bit rich for our blood.

This was surprising, since the doughs all felt wetter than with many other flours. Still the bread had a

rich satisfying aroma that enveloped me and knocked me over as soon as I cut the bread.A rich rye aroma, lots of caraway - it wasn't quite as nice as the aroma of the 20% Bran Flour Bohemian Rye, but was very, very nice. The crust was nicely browned, thick, flexible, chewy, and had nice rye and caraway tastes in it. The bottom crust was fairly crisp. This was a crust to be enjoyed! The crumb was somewhat dense, featuring small to medium sized holes in an irregular pattern. The crust was not very springy, and it wasn't as flavorful as the aroma would lead you to expect. All in all, the crust was nicer than the crumb. The bread came into its own a few days later, when the rye and caraway tastes intensified, for reasons unknown.

The Ciabatta bread had a mild sour aroma that intensified over

few days. The loaf spread more than rose in the last rise, which was disappointing since the loaf had risen so well in the mixing bowl. The crust was moderately thick, flexible to a point after which it snapped. The crust had good tooth, and was fairly bland - which is desirable for this bread. The crumb was open, irregular, with small to medium sized holes in it. The flavor had a nice mild sour note which became much more forward over the next two days. The bread was very nice with oil, and had a slight nuttiness to the taste which was very pleasant.

The Simple Sourdough Pan Bread was odd. It didn't rise

as well as usual, 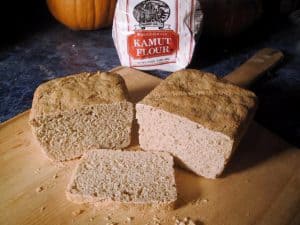 the sour taste was pretty mild, and when it was fresh there was a slightly stale note to the taste. The stale note went away in the next day or two. The crust was lightly browned, thin, flexible, crispy to the tooth, with a nice sour taste. The crumb was tight, had a poor rise, poor definition, with smallish holes. The sour taste lasted a long time, but was not as strong as in the crust. It was bland and unexciting, other than the long sour taste. The crumb was somewhat springy, but tended to remain compressed. 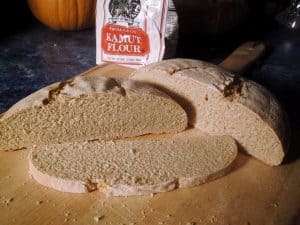 slice felt heavy. Much more heavy than other slices of this same bread made with other flours. The bread's aroma had a minimal sour note, but little wheat or other aroma. The aroma was not inviting, engaging, or interesting. The crust was lightly browned, thin, flexible, and bland. The crumb was tight, poorly defined, had little spring, and little taste. Things did not get better as this bread aged. It started a loser, it ended up a loser. Our dogs usually love bread, but this time only one of our dogs would eat it, and I think she ate it so the other dog wouldn't get any of it.

Hydration Pictures As discussed, we took pictures at 60, 80, and 100% hydration. As with many coarsely ground whole grain flours, it took a while for the flour to become hydrated, after which if felt wetter than white flours at the same hydration levels.