One of the first things you hear as a baker is that whole wheat flour can't rise as well as white flour. You've probably also been told why.

Whole wheat flour doesn't have as much gluten or protein, we're told. Looking at the results of our flour tests, we see that two of the highest protein flours are whole wheat flour. One is the Hungarian High Altitude Whole Wheat Flour at 13.3% protein and the Wheat Montana Prairie Gold at 15% protein. We're also told that the whole wheat grains have jagged edges and that that deflates the dough instead of letting it rise.

Still, Laurel's Loaf for Learning converted for sourdough rises nicely. In her book, "The Laurel's Kitchen Bread Book", Laurel Robertson tells us that if we handle the whole grain dough carefully, delicately and appropriately it will rise as well as white flour.

Recently I tested Hungarian High Altitude Whole Wheat and Sam's Baker's and Chef's Bread Flour. I was stunned to see that the Simple Sourdough Pan Bread recipe rose as well with the whole wheat flour as the bread flour.

Before baking, the loaves were almost identical,

except for their color. When looked at straight on, the peak of both loaves were about even.

When the bread came out of the oven, the 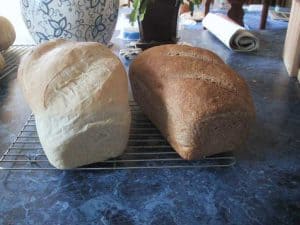 white bread loaf had shown more oven spring than the whole wheat loaf. This was a surprise as the Simple Sourdough Pan loaf usually has no real oven spring.

And here we have a look at the sliced loaves. Because of the oven spring,

the white loaf sprang ahead, but both are nicely risen, have a soft crumb and are nice sandwich breads.

Two quick comments - no gluten was added to either loaf. The vertical line in the wheat bread was where I stuck a thermometer into the loaf and then foolishly cut the bread at the same spot. Of course, I didn't notice that until days later... after the bread been eaten.

My suggestion is to mix the dough, knead it for 5 minutes, cover it and let it rest for 5 minutes, and then knead for another 5 minutes.  The dough will settle down during the rest period.  I try to not add more flour or water until the second kneading.