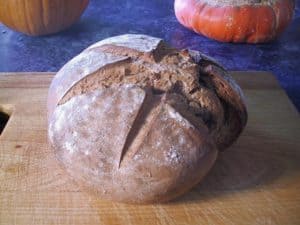 This recipe is a modified version of a seeded mixed rye and wheat bread from my good friend Samartha Deva. Samartha is one of the two best rye bakers I have met. His breads make me feel like I'm back in Germany.

Mixed breads were common in older times when farmers would sow their fields with wheat and rye. What grew depended upon the weather. If the weather wasn't good for wheat, the hardier rye would still feed the family - and the village. So, mischbrots were the rule rather than the exception. While agriculture is a lot more reliable than it once was, people still like mischbrot in Germany. And so do I. If a bread is mostly wheat it is a weissmischbrot, or wheat mixed bread. And if it is mostly rye, it is a roggenmischbrot. This bread is pretty much on the fence, but it has a smidgen more rye so we're calling it a roggenmischbrot.

In addition to the wheat and rye, we add seeds to give the bread more flavor and some crunch. A few people have told me they can not deal with seeds, it upsets their digestion. In that case, you can grind the seeds. Check your grain mill to see if the seeds we're using can be ground in your grain mill. Some mills have trouble with oilier seeds such as flax and sunflower seeds. If your grain mill can't tolerate oily seeds a coffee mill will do the trick.  I love the texture of seeds in my bread, and the burst of flavor they provide.

In our classes I tell students it's not their recipe until they change it. A case in point, Beth (the better half of Bake With Mike) doesn't like fennel, so I leave out the fennel seeds when I'm making the bread for her.

To get started we want to make sure we have a lively rye starter. The fastest way I know of to make sure is to use the Detmolder Three Stage Process. We talk about this a bit more in my New Bohemian Rye recipe. The Detmolder Three Stage Process is is a precise control of time, temperature and feedings to wake up a starter and get it to optimum health quickly. As the name suggests there are three stages here.

With a whole grain and/or coarse rye flour you may not notice much activity, but a sniff of the starter should tell you that the starter IS fermenting! Now, we're ready to make the final dough. Mix together:

Method: Knead the dough for 5 minutes, let it rest for 5 minutes, then knead for 5 more minutes. Adjust the liquid in the last knead, if needed. Cover and let rise until doubled. Divide into two loaves. Knead briefly, shape loaves, and allow to rise until doubled. An hour into the last rise, start pre-heating your oven to 550F(290) When the dough has risen, transfer to tiles in the oven, add some water to a pan on the floor of the oven, and drop the temperature to 425F(220C).

Bake for about 40 minutes. Allow to cool for a day before slicing the loaf - it takes a while for rye to firm up.

Sadly, we misplaced all four sets of photos of this bread.  Still, go ahead and make it - it's a great bread!