The way bakers talk, you'd think think we're control freaks. And, to some extent, you'd be right. A lot of the development of a bakers skills comes from measuring what they do, correlating the results with what they measured, and bringing their processes under control. One of the things visitors note when they visit the Acme Bread Company in San Francisco is that Acme measures EVERYTHING. The times when processes start and stop; the temperatures of the room, ingredients and products; and on and on. And Acme produces very good, and very consistent, bread. Of course, taste and a sense of aesthetics are important also. They help define the goal of this effort.

One of the things that most home bakers have trouble controlling is the temperature at which their dough proofs and rises. Commercial bakeries have proofers and even computer controlled retarder/proofers - they keep the dough cool until the appropriate time and then start heating it. This lets the baker sleep well, knowing that the dough is being well taken care of. As home bakers, our options are more limited. There's a reason that it seems very wasteful to heat, or air condition, the whole house to keep the dough at the right temperature - and that's because it is.

To some extent, you can use an oven - often the oven light will keep it at a reasonable, but not controlled, temperature. For the Bake With Mike classes we tend to use our laundry room as a proofer. We have a small space heater that can keep the room warm in the cooler month here in Texas.

In addition to controlling the temperature at which dough is risen, a proofer

can be used to control the temperature of starters and preferments as you prepare for the next day's bake. As a result, I was very interested when Michael Taylor of Brød and Taylor asked if I'd be interested in looking at their new portable bread proofer. I agreed, because I really needed something like this. A bit of a disclaimer. I am not selling this product, and don't plan to do so. I won't get a commission on sales either. While Michael is letting me keep the proofer, that is common industry practice - the shipping costs and the fact he could no longer sell the unit as new mean that there is no real advantage to Michael if he has me ship it back. I believe that this review is fair and impartial. I hope you agree.

Two weeks ago, the proofer arrived at my house. The box says it can also be used to temper chocolate and make yogurt. I suspect it will be useful for anything that requires a controlled warm temperature. It is rated for 70 - 120F. At this time, it is only available in Canada and the USA and it must have 120VAC. These things are scheduled to change in the next year, when they expect to announce an international model.

All the pictures in this email are links to larger pictures on the web site, so if you want a larger view, you can have it. Also, all the pictures were taken with my cell phone, a Samsung Epic 4G, using HDR (High Dynamic Range imaging) software. I was very pleasantly surprised how well the pictures came out. If you have a slow connection, or if your ISP limits how much data you can view, I'm sorry if this email blew you out of the water.

One of the first things you notice is that it IS portable. It is pretty light, with a shipping weight of about 8 pounds. It is about the size of a laptop computer with a 17" screen. The top is hinged, and when you raise it it can be removed, revealing the sides of the unit, neatly folded, as well as a rack, a power cord, and a small tray. When the sides are unfolded, the top is set on top of the sides and you have a heated box. Or a proofer.

The heating element either is the metal plate at the bottom of the unit, or is beneath that plate. Above that is the power cord, a small tray that is used to hold water to humidify the proofer, the folded plastic walls of the proofer, and the rack that holds whatever you are warming. It is not recommended to use the unit without the rack.

The water tray was surprisingly effective at maintaining a moist environment for dough proofing. I filled the tray with water and let the unit run overnight. The uncovered breads I allowed to rise overnight and the starters and preferments I allowed to work overnight were moist in the morning with no skin on them to suggest they had dried out. How effective the tray of water is might depend on how humid the area where you live is. The Dallas area is fairly humid, so a small increase in humidity could make a lot of difference. I'd be interested in hearing from people in drier climates, such as the near desserts of west Texas or in the Rocky Mountains. However, if I still lived there, I'd be more than willing to try raising some dough overnight to see what happened.

All set up, it's about the size of a small microwave oven. The generous sized window give you a great view

of whatever is happening inside the proofer. This minimizes heat loss from opening the lid, since you don't need to open the lid. However, I used an accurate and sensitive thermometer and found that the unit didn't lose much heat when it was opened, and that it recovered quickly.

said it used about .4 watt. (Yes, that is four tenths of a watt.) When the heating element cycled to maintain heat, the power consumption "jumped" to .5 watt, or half a watt. In other words, I don't think you'll see much of an impact on your power bill from using the proofer. The buttons on the front panel let you set the temperature you want very easily.

Interestingly, the unit remembers the last temperature it was set to, even when it is unplugged. It remembered for a week on one occasion. I liked that feature a lot! One downer of the unit shows in this picture. The power cord connects to the front panel of the unit. And the power cord is pretty short. The combination make it a little harder to use than it needs to be. I'd prefer the power connector to be on the rear of the unit and/or the cord to be a little longer.

The cord length is an issue in another regard. The spacing when folding the unit up is quite tight. As a result, you have to put the power cord in just so or the top won't close all the way. After you fold it up a few times, you'll get the hang of it, however a longer cord would have made that issue worse.

The is a minor question as to which side is the front and side. The wide side with the words "Brød and Taylor" on it, with the hinge that lets you open the unit could be considered the front. Other people might consider the side with control panel to be the front. Brød and Taylor consider the wide side to be the front and the control panel to be the side. So, from their point of view, the cord comes out the side. Considering you don't have to adjust the controls very often, I guess that's reasonable. In my kitchen it made more sense to have the control panel facing me, so I thought of it as the front. In any case, the cord is short.

Looking at the inside of the assembled unit, you see a nice amount of space. However, it would be great if it were just a little larger. It isn't quite large enough to hold a half sized sheet pan. It is large enough to hold two or three bread pans, depending on their size, but you'll have trouble getting two bannetons or brotforms in there. Some bakers I've talked to have been clever. They put a second rack on top of the brotform or banneton, and put another banneton or brotform on top of that. Other bakers cleverly bend paper clips to suspend a second rack above the first. This can easily double the effective

size of the unit. Two sandwich pans in the proofer!  Brød and Taylor have indicated they will find a way to let the next model handle two racks without these Rube Goldberg work-around.

The picture to the right shows to loaves of my jalapeno cheddar cheese bread rising. The yeast I was using, as I mentioned in the last newsletter, was past its prime so it took all night to rise. The good side of that was that it showed me the water tray was definitely doing its job! The loaves were risen the next morning and the surface of the dough had not formed a skin!

The next weekend I was holding my "Mastering Flavorful Breads" class where we use autolyse, biga, poolish, and sourdough 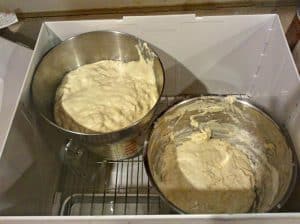 to make some very flavorful breads. The biga, poolish and sourdough need to work at a warmish temperature overnight. Fall has fallen, and we are trying hard to not heat the whole house to heat three preferments - houses are not efficient proofers! So, it was getting into the mid 50's to low 60's in the house at night. I set the proofer for 75F and in the morning, my preferments were just fine! As you can see, one mixing bowl is on top of a glass measuring container. It worked just fine, even without the paper clip and extra rack trick I heard about later.

As you can see in the picture to the right, the poolish has reached its peak

and has started to recede, or fall down. The poolish has many, many bubbles in it, but of greater importance is the surface of the poolish. You can see places where the poolish has begun to form little cracks or crevasses that look somewhat like dry creek beds photographed from an airplane.

While there are a few rough spots in the proofer, I really, really like it! I slept a lot better knowing my preferments were at the right temperature. I feel good knowing that dough won't dry out. I like that the temperature control is effective. There are minor flaws in the design, but I suspect they will be ironed out.

Some people might balk at the $169 price. I'm somewhat of a tightwad, but I've spent more for less. I think the price is reasonable. If you are an avid baker and the price won't be a burden, I highly recommend buying the proofer. Whether you are celebrating Christmas, Hanukkah, Kwanzaa, the Winter Solstice or the harvest, the winter gift giving season is just around the corner, so you might print a copy of this as a hint to your special Santa Claus. I've seen this carried by Amazon, Pleasant Hill Grain, as well as at the Brød and Taylor web site.  The Brød and Taylor folks are signing up retailers so it may be available near you. I hope they get the folding proofers into the stores in time for the season!

You can find additional information about the folding proofer at thefreshloaf.com as well as at YouTube. I haven't heard anyone say anything really negative about it - it's a really neat product!