Where we bought it: Gunnison Valley Vitamins and Health Food Store, Gunnison, Colorado

Interesting Vendor Story: Spelt is an ancient form of wheat. Although quite common in Europe, it was all but forgotten in the USA until a decade or so ago when it was rediscovered by the health food community. Some of the marketing hype says that Spelt is an alternative to wheat. It's not. It is a form of wheat. However, some people with wheat sensitivities can eat spelt without ill effect. This does not seem to be the case for people who have celiac disorder or other gluten sensitivities. VitaSpelt, a division of Purity Foods, is the main, and perhaps only, distributor of spelt products in the USA.

Important Disclaimer - I am not a doctor. I haven't even played one on TV. As a result, I will not suggest anyone try Spelt as an alternative to wheat. If you have a medical problem that prohibits you from eating wheat, talk to your health care professional before eating spelt. It's your life. Please protect it as if it were the only one you had!

Our first impressions : Dr. Ed Wood raved about spelt flour in one of his books, so we had to try it. Most of his recipes called for the use of some spelt flour, rather than using all spelt flour. We used all spelt flour in part so we could see what it was really like, and in part to see what someone who could use spelt instead of regular wheat flour would encounter.

Our first observation is that it's expensive. Expensive enough that if this was our only choice, we might decide to forgo bread altogether. On the other hand, using spelt flour is no more expensive than buying artisanal bread from a bakery, and would have the advantage of being edible if we were in a position of needing to avoid wheat, but being able to tolerate spelt.

We found it handled nicely. And it should for that price.

Any special reason we're testing this flour: To see what it's like, see above.

How'd we screw up the tests this time? For reasons unknown, the Simple Sourdough Pan Bread over proofed and collapsed, giving the bread a flat top. The bread rose no longer than the other times we've made this bread, and we were using the same sourdough culture, so we assume that this related more to the flour than us.  Also, we forgot to take the "Family Portrait".

Conclusion - we'd like to say we loved this flour, but in the end, we liked it. But for the price we have to pay for it, we want more than like. We'd have to love this flour to be able to cost justify it, unless it was the answer to our health needs. That's not the case for us, so we'll just pass on this one.

While Ciabattais one of our favorite breads, the ciabatta we made with VitaSpelt White Flour didn't thrill us. It didn't have as wonderful a crumb as some, it didn't rise well, and it spread out too much. The taste was fine, though a bit on the subtle (or bland) side, with too little wheat taste to thrill us. It didn't have the big holey texture we like in our ciabatta, but I'm not sure that a bread that flat can have big holes. It's not that it was bad, mind you, it's just that it wasn't very good.

Simple Sourdough Pan Bread - A simple bread, well made, can provide a great deal of breadish pleasure. The Friends of Carl Simple Sourdough Pan bread is such a bread. It brings out the sour in most flours, and delivers a very pleasant loaf. Sadly, this loaf, while pleasant, didn't distinguish itself. One issue was that the dough over proofed and collapsed rather quickly, which caused the loaf to have a flat top. If were were to use this flour again, we'd reduce the amount of starter so we could extend the rise time without causing the bread to over proof. It was a nice loaf, but the flour was mild and the sourness development minimal - especially considering the loaf had been over proofed. The crumb of the bread was nice, with some medium sized holes in it. We don't know what the crumb would have been like if the loaf hadn't collapsed. The crust color was a bit too light. In short, we've had versions of this bread we liked better. 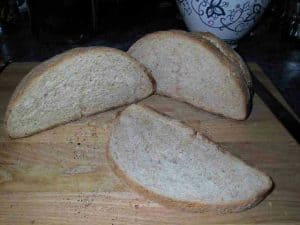 Three stage French bread, or Pain au Levain, is a complex traditional French bread, unlike the sticks of air that are sold as French bread throughout this country. The taste of the VitaSpelt white flour version of this bread was somewhat bland, delivering neither a good wheaten taste nor a strong sourdough taste. The crumb wasn't terribly well defined, but the crust color was delightful. This bread showed, more than the others, the slightly gray cast to the flour. This is probably partly due to the flour, and partly due to the flour being unbleached. Again, there isn't anything really wrong with this bread, but you can do better.

Hydration Pictures As discussed, we took pictures at 60, 80, and 100% hydration. At each hydration level, dough made with VitaSpelt white flour seemed wetter than with many other flours. This let us avoid the flying crust that plagues many of the rye breads we've made in the course of this test. Even at 60% hydration, the dough remained wet and pliable, and it let us seal seams in the dough. 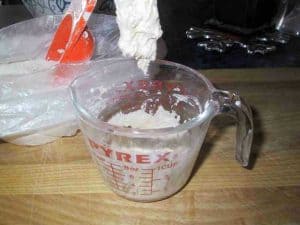 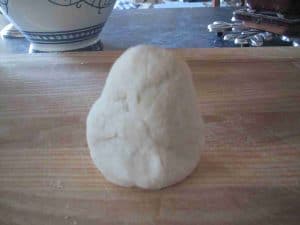