Kaiser rolls are marvelous rolls. A crisp crust, a nice depth of flavor,

and a nice crumb make this a killer roll for great sandwiches, and a great bun for hamburgers. Far too many so-called Kaiser Rolls miss the mark - no crust, no flavor, and no real crumb. So, let's make something a lot closer to the real thing!

When we were running our bakery, we sold tons of these. I cannot remember, without wincing, how many nights were spent making endless Kaiser Rolls. One 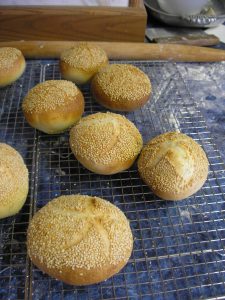 of our customers, The Gas Cafe in Crested Butte, Colorado is known for having some of the best breakfast sandwiches and hamburgers in the state. One review in a big newspaper commented on how much their (OUR) rolls added to their hamburgers. Every time I've gone in there since we shut down the bakery Eric, the owner, has called me "Jerry" because he says I look like Jerry Garcia

and asked if he can have some more Kaiser rolls. Sadly, I'm not sure if we ever made money on these rolls - without specialized machines to help make these rolls, the labor costs are pretty high.

This recipe is changed to sourdough from a yeasted recipe I saw in George Greenstein's "Secrets of a Jewish Baker."

This recipe is for 1 dozen 3 1/2 ounce Kaiser Rolls. 3 1/2 ounces is a great size for sandwiches and they can also be used as fabulous hamburger buns. Please be aware that the cups and gram measurements are approximations of one another. Most people who measure in grams do not want to weigh out 1,234 grams. 1,230 is close enough. Nor do people using cups want strange cup measurements like 3/16 cup. So, please don't think that, for example, 90 grams of flour is 1/2 cup.

Mix the ingredients until they come together. At this point, you may use the stretch and fold process, or knead the dough.

Once the dough is developed, divide the the dough into 12 more or less equal sized pieces.

Roll the dough into balls as if you were forming little boules. There are two major ways to make the rolls. One is to pick up a dough ball and tuck the dough under the ball, which will tighten the dough on the surface of the ball. Keep turning the ball horizontally as you tuck the dough under. When the roll is a tight little dough ball, turn the ball over and pinch the seam under the dough ball together. This is a very good way of making a roll, but it takes two hands to do this, and it takes a bit of time.

As you form the rolls, set them aside and cover them so they won't dry

out and let the dough relax about 20 minutes. While the dough is relaxing, put a sheet of parchment paper onto a baking sheet. Once the dough has relaxed, it is time to take the steps needed to turn the roll into a Kaiser roll. In this area, we are going to take a shortcut. Classically, bakers rolled the dough balls into a flat circle, and carefully folded and sealed the dough into the classic cloverleaf shape. Sadly, this is hard to do and takes too long. Instead, we'll use a Kaiser roll stamp similar to the one at Amazon.  You want one that is as wide as the rolls, and has a flat cutter.  Stamps with a rounded bottom don't cut the rolls well, cutting too little on the edge of the roll.  Using a stamp is a shortcut, and it does compromise the quality of the roll. However, you will still be making a roll head and shoulders above anything you are likely to be able to buy.

To use the stamp, start by dipping it in medium or light rye flour. This rye flour will help keep the cuts in the rolls from closing. Press down on the roll. As you press down, you will feel an increasing resistance as you press down. If you press a bit too far, the resistance will suddenly end and you will cut the roll into 5 pieces. You want to shoot for the point just before you cut the roll into pieces. Like riding a bicycle, this takes a bit of practice.

Pre-heat your oven to 425 F (220 Celsius). I strongly suggest steaming the oven as you put the rolls into the oven. Just before baking the rolls, flip them over so they are cut side up. Bake for 15 minutes, turning the rolls half way through the bake. Immediately put the rolls on a cooling rack. You want a crisp and nicely browned crust. More than half of bread's taste is in the crust, and it is developed by browning - don't shortchange yourself on the flavor you can get out of the roll by under-baking it.

There are many ways to enjoy these rolls. Slice them in half horizontally and make sandwiches on them. You can toast or grill the rolls. And you can break the rolls apart and have them with preserves or dip them in oil.