A recurring question I receive is what to do with leftover or excess starter. And there are many good answers. Making pizza shells is certainly one of them. Making Blueberry Muffins is another. 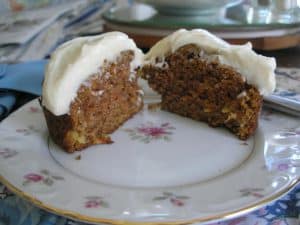 If this recipe were just a way of dealing with leftover starter, it would be worth including here. But I don't do things like that. Each recipe on Sourdoughhome.com has to stand on its own merits. And... let me tell you, this is a great recipe! The cupcake is dense, moist, spicy and very, very rich. Even without the frosting. You might be tempted to leave off the icing, but please don't! Face it, this isn't a "healthy" recipe, and leaving off the icing won't make it "healthy." It's an indulgence. So, INDULGE!

How much of an indulgence? How irresistible? When we ran the Colorado High Attitude Bakery we made these cupcakes the size of mini-cakes. And if I had a nickel for every time I heard someone say, "Oh, that's just too big, I could never eat a cup cake THAT big!" and then eat the whole thing, I could retire. It's an awesome recipe. I have to thank Joe Artim of the Grateful Bread Bakery of Sacramento for the inspiration, but we have changed things a bit here and there.

It's an easy recipe, though it was easier when we could call the food service company and buy bags of shredded carrots. If you can do that, you can avoid a minor hassle in peeling and shredding the carrots. But, it's worth it. While this will probably make a great cake, I have to confess I've never made this as a cake, only as mini-cakes and cupcakes, so your baking time will vary. Now then, here's the recipe, which will make about a dozen very large (8 ounce or so) cupcakes.

Please be aware that the cups and gram measurements are approximations of one another. Most people who measure in grams do not want to weigh out 1,234 grams. 1,230 is close enough. Nor do people using cups want strange cup measurements like 3/16 cup. So, please don't think that, for example, 90 grams of flour is 1/2 cup. The most precise numbers below are the bakers percentage numbers.

Start by preheating your oven to 375F (190C).  By the time the batter is ready, the oven should be good to go.

Beat the first three ingredients, the sugar, oil and sourdough starter, together

until they are smooth. The sourdough

starter should be quite tart to the taste, a sign of acidity. This recipe is similar to a buttermilk and soda cake, but the acidity is provided by the sourdough starter. We don't let the sourdough starter raise this quick bread the way it would raise a normal bread, but instead by creating gas by reacting with the baking soda.

Beat until smooth, then add the bread flour, pineapple, carrots, cinnamon, baking soda and salt.  Add these ingredients one at a time, beat until fairly smooth.

Then add the nuts and mix until the nuts are just incorporated and more or less evenly distributed. At this point, we don't want to overwork the batter.

Spray your cupcake, or cake, pan with a releasing spray. We like sprays that have flour in them, such as Baker's Joy, Baker's Secret, or the new PAM spray. Scoop the batter into cupcake forms, until the form is about 3/4 full. We like commercial food

scoops because it makes it easier to be consistent. Once you have scooped the batter into your cupcake forms, or poured it into a cake pan, check that the oven is at the right temperature,

put the pan(s) into the oven and bake the cupcakes for 15 minutes, rotate the pans and bake another 15 minutes. Check the cupcakes, or cake, for doneness with a toothpick.

Let the cupcakes, or cake, cool for a few minutes, then carefully remove the cupcakes or cake from the pan, and let it cool on a rack. We usually carry a nice cooling rack at Mike's Bread Shoppe. While the cake, or cakes, are cooling, make your icing.

Start by mixing the cream cheese and butter until they are smooth and light. Then add the powdered sugar and vanilla

extract.  Beat the icing until it is smooth, then apply to the cooled cupcakes, or cake, with a spatula. The icing will set up a bit, but will remain fairly soft and sticky. It adds a lot to the cupcakes, so pile it on generously!

Some people obsess about icing and frosting. It's really not hard, and for most cupcakes and cakes, it doesn't have to be a work of art. For the neatest job, brush any crumbs off the cupcake or cake, put on a thin layer and let that dry. This thin layer, called the crumb icing, will trap any stray crumbs. using a clean spatula put a second, thicker, layer of icing on the cupcakes or cakes.

Some people say these are better the next day. I wouldn't know, as when we sold them, they always sold out the first day. And when I baked them for this web page, people just seemed to show up to enjoy them.

Now that's what I call a special breakfast. OK, maybe it's not all that well balanced, but every meal doesn't have to be balanced. Not even every day has to be balanced. Think in longer time frames, and take time to enjoy the now!