Hello Breadheads!
Tilting at Windmills! MONTHS ago I filmed a video on creating a starter in 2 1/2 days using Dr. Calvel's method with the intent of baking a loaf of bread with the 2 1/2 day old starter. I talked about it in the newsletter, and a blog post here. In bread making, creating videos, and true love nothing goes smoothly. The first time, I managed to mangle the loaf as I dropped it into a Dutch Oven. It still looked pretty good, and tasted great as well. But it really wasn't what I wanted. I could have baked again the next day, but that wouldn't have been with a 2 1/2 day old starter, now would it?

So I created a new starter. Only I was in a frustrated hurry and cut 5 or 6 hours off the first step. Those hours were crucial, and that starter never really made it. The lesson here is to follow the instructions, and that while the most important ingredient in baking is patience, the most important ingredient in sourdough baking is even more patience!

So, I made yet another 2 1/2 day starter. And then our air conditioning went out. This is not something you want to have happen in a Texas grade summer. And when it happens, the last thing you want to do is fire up the oven! Since then, we've put another oven in the garage so the house doesn't get heated up when we bake! Still, with the air conditioning dead, the dough would have handled differently, so even if we'd had the new oven, it wouldn't have been a fair test of the starter.

After 5 days, the air conditioning was fixed! Life was good again! So, I created yet another 2 1/2 day starter. And then made some bread. Which we filmed. (Is it "filming" when you use a digital camera with no film involved?) And then we started editing... which was a bit of a bother. Many small files to splice together. Anyway, now it's done, and the video is online on our YouTube channel. I learned a lot! Which reminds me of the email tag line, "OH NO - A learning experience!"

Going to Downtown Flavortown! A shoutout to Daisy at the Breadboard Bakery in Arlington, Massachusetts. If you're near there, you should go there, but order ahead. During the Covid-19 upset she wants advance orders online with pickup at the bakery. A pity, because knowing her I'm sure the bakery experience was a delight for customers, and will be again! Daisy shared some pictures of some amazing biscuits in her Facebook page. Loving biscuits the way I do, I was wondering how she got that color. She is using a blend of flours that gave her the color and the flavor she told me about. Since we're about 1,200 miles apart I haven't tasted those wonderful looking creations.

She makes the biscuits with a blend of all-purpose flour, whole wheat flour, rye flour and buckwheat flour. And that inspired me to make baguettes. The biscuits are still a work in progress. Who am I kidding - every bread recipe is always a work in progress! You keep tweaking it to adjust for your taste, changes in the flour, and a host of other things.

Anyway, I mill the whole wheat, rye and buckwheat flours in my trusty MockMill 100. I run the grains through once at a coarse setting and then again at as fine a setting as I can manage. I feel the flour and want it to feel velvety with no hint of grit. Normally people close the millstones until they are starting to touch and then back off. As per Guy Frenkel's suggestion, I move them even closer once the grain is being milled. The grain keeps the mill stones from touching and the grind is considerably finer than the way most people mill their grain. When Guy suggested this, I thought he was crazy (the jury is still out on that), but the folks at MockMill have said this is not a problem. I'm still working on making the crumb a bit more open, but the flavor is exceptional. I'm using Abruzzi rye and Marquis wheat from Barton Springs Mill. It seems all the southwestern Whole Foods stores are carrying their products, though other good grains could be used as well. If you don't have a grain mill, you can use pre-milled flours, of course. We got the buckwheat from a local health food store.

The recipe below is for four 18" 240 gram baguettes. You can scale it for larger or smaller baguettes, as well as for more or fewer ones. The amount of dough and the length of the baguette together control it's width. Use more dough, or don't roll it out as far, to make wider baguettes, use less dough or roll it out further to make skinnier baguettes. A baker friend is very fond of ficelles - a baguette about as big around as one of my fingers. I think they're all crust, he thinks they are delicious and delightful. The real point here is to make them the way you want them!

Do another stretch and fold (or a coil fold). Cover the dough and let it rest another 30 minutes.

Do a third stretch and fold (or a coil fold). Cover the dough and let it rest another 30 minutes.

Now check the dough to see if it can give you a nice windowpane. If not, do a fourth stretch and fold (or a coil fold). Cover the dough and let it rest another 30 minutes.

At this point, move the dough to a rising container and let it rise by 25 to 50%. Once it has risen, form into baguettes, cover and let rise. This is a fast moving dough, so start preheating your oven to 425F/220C. When the dough is risen nicely - probably about an hour or so - slash the dough, put it in the pre-heated oven, steam the oven and bake it for 25 minutes. I like to turn the baguettes half way through the bake and get the steam out of the oven at that point.

I think you'll like these multigrain baguettes! I know we do! I think a serving is half a baguette, so the nutritional analysis is: 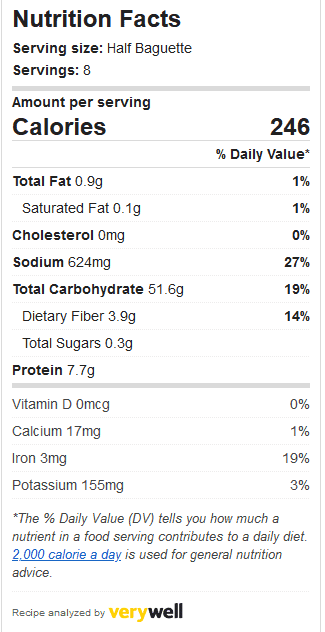 A little lagniappe - resurrection! Lately I've been baking a lot of multigrain baguettes. And some of them get stale before I get around to eating them. Many people are very, very sensitive to stale bread, and only want to eat FRESH bread. I find a use for stale bread - bread crumbs, bread pudding, croutons. However, there are times when I want to eat the bread and would live to revive it, to resurrect it. I'd read about this a number of times and had never tried it. NOW was the time.

Rinse the bread just a bit in cool water, put it in the oven and bake it at 350F/175C for 5 minutes. At the end of this, the bread is pretty much like new again! I was told this only works once, so I've only revived the amount of bread I plan on eating.

Until next time, may your dough always rise no matter what strange mix of flours you put into it!
-Mike