Should I hook, or should I roll?  We could turn that into a rock'n'roll anthem!  What's it all about?  Hang in for a few more paragraphs, and you'll be in with the in crowd!

Like many bakers, I grew weary of my KitchenAid mixer.  I wanted more capacity than the 4.5 quarts it hinted at or the 8 cups of all-purpose flour or 6 cups of whole wheat flour the manual said I could use.  They say it can make 3 loaves at a time, though each of them would be just under a pound.  Worse, the reports of KitchenAids failing were worrisome.  The KitchenAid manual warns that you should not make more than 2 batches back to back, and then let the mixer cool down for 45 minutes.  After trying a Bosch Universal Mixer, I sold it on eBay and then got an Electrolux Assistent, now sold as an Ankarsum,  which fans call "Ank".  I've had it over 10  years and it is still a workhorse.  I've made batches as large as 4 dozen bagels and it made them with good grace.  A maximum load is in the 8 to 10 pound or 4 to 5 kilogram range.  It can make 8 loaves of the just under a pound size the KitchenAid can make 3 of.  It has no trouble with whole grain flours and no trouble with back to back loads.  Yeah, I like it!

Lately, I've heard people saying that all the hook does is tear the dough, that it doesn't develop it.  They say that the roller emulates the action of hand kneading.  Because it is so gentle, they say you can make dough with less flour.

A few people say that a machine can't develop dough, and they use a mixer for the initial mix and then develop the dough with stretch and fold techniques.  I've NEVER had trouble getting the dough development I wanted using any mixer.  The breads in Calve's "The Taste of Bread" were mixed with a large Hobart mixer (think KitchenAid on steroids) and the breads were wonderful.

Still, the question of the hook or the roller deserves to be tested.  The cynics among you may say it's a bit late to have a shootout on the hook versus roller question since I've had the mixer for for over a decade.  Yeah, but on the other hand, the mixer has served me well.

This project caught me with my starter down.  It was 9 AM and I wanted to mix some dough RIGHT NOW!  So, sourdough was out.  And I wanted as simple a dough as possible.  Flour, water, salt and yeast - amirite?  None of my recipes or formulas hit that nail on the head, and then I remembered that General Mills had given away a wonderful guide called, "Creating Artisan Breads" that had a great baguette recipe in it.  I scaled the recipe to make two 1 1/2 pound loaves, and to use instant dry yeast instead of fresh, or compressed, yeast.

Note 1 - different salts have different densities.  Te weight is correct regardless of salt type.  You may need to adjust if you use kosher salt, sea salt or artisanal salts.

This was a great choice!  A simple bread which filled the house with amazing aromas as it was baked.  And while I made pan loaves rather than baguettes, it still turned out great.  I made videos of the mixing of both batches.  They are below, and they are about as exciting as watching paint dry.

For the dough made with a hook, I dumped all the ingredients into the mixer and let it rip!  5 minutes of mixing at the lowest speed, a 5 minute rest to the let the moisture equalize and the dough relax, and then another 5 minute knead at lowest speed.  The dough came out nicely,

For the dough made with the roller, I used the technique suggested in the Ankarsum videos.   They start by adding the liquid to an empty bowl and then adding the salt.  Start the mixer and then add the flour a bit at a time.  Once some of the flour has been added, add the yeast.  The claim that you can make a dough with less flour by using the roller doesn't seem to look good in the cold light of dawn.  I weighed the ingredients and the roller used the same amount of flour as the hooked dough.  The dough was rolled for about 12 minutes at a higher speed than the hooked dough was mixed at.  The speed knob was set to about 2 o'clock.  (I really wish the Ank had a better speed selector system.  It just seems so vague and imprecise.)

After mixing, the dough was coated with a bit of olive oil, covered and allowed to rise for an hour. 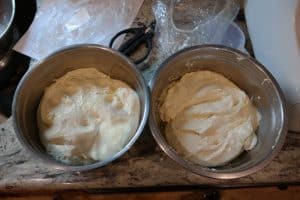 After the rise, it was time to preshape and shape the loaves.  The rolled dough surprised me in that it was not at all sticky.  Both doughs formed nice loaves.  The loaves were put in bread pans, covered and allowed to rise.  After panning the loaves, I turned the oven on to 425F/220C to let it warm up.  After about 40 minutes the loaves were risen and put in the oven.  After 20 minutes, the loaves were moved around in the oven to ensure they were evenly baked.  After 20 minutes more, they were pulled out of the oven, checked to see if they were done and then allowed to cool.

Here are some more pictures. 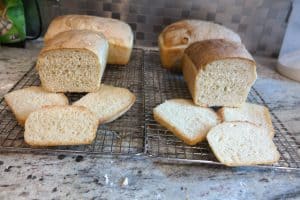 In the pictures above, the hooked dough is on the left, the rolled dough is on the right.  The crumb on both breads was a very nice sandwich bread crumb.  It felt good when I ate it, and both loaves tasted great!

This leaves me with questions.

Until next time, may your dough always rise, no matter how you develop it!
-Mike