health food stores where we sold bread. It inspired many of the other raisin breads in this book because it taught us to really love raisins in bread.  It's a great bread. It is based on our Challah, but jazzed up a good bit.

Oddly enough, one of our favorite customers told us he didn't like sourdough breads, but really liked our Cinnamon Raisin bread. We were never sure if he 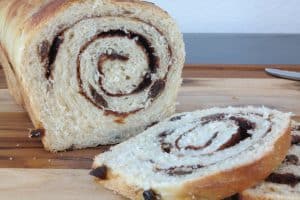 was aware that it is a sourdough bread. So we smiled, nodded, and thanked him. In this bread, the sourdough isn't very forward. It adds a depth of flavor that isn't in most cinnamon raisin breads without being in your face. It also extends the shelf life of the bread considerably.

Like our Challah recipe which this is based on, this bread makes great French Toast - several of our regular customers ordered extra loaves every Friday for their weekend brunch crowd.  It's also great just toasted - a local resort put it on their breakfast buffet where the crowd loved it!

There are three keys to making this a great bread.  They are:

At the bakery, we liked to pre-mix our flavor blends so we didn't have to think about them very often. In this case, we mixed 1 part of cinnamon to 4 parts of brown sugar, by weight. That meant one pound of cinnamon to 4 pounds of dark brown sugar. Then we mixed the ingredients together well. And spooned them onto the bread until it looked right.

Set the brown sugar mix aside and start making the

Let's have a little digression to talk about eggs.  The recipe calls for 1/4 cup of beaten egg, or 30 grams.  A large egg weighs 50 grams on average.  Life is really to short to beat an egg and measure 1/4 cup or 30 grams.  For most purposes, I cheat and simplify things.  I round the eggs.  In this case 30 grams rounds up to 1 egg.  To make up for this, I use less water.  .  So, for this recipe, I tare scales with the mixing bowl on it, break an egg into the mixing bowl and then add water to the bowl until the scales reach the total desired weight of egg plus water.  Or, 30+330, or 360 grams. but it is close enough and a lot better than beating and weighing 30 grams of eggs.

While the dough is rising, it's time to make the cinnamon and brown sugar mix. If you bake the bread regularly, you can mix large amounts of this and store it until needed. We typically made 5 pounds at a time (four pounds of brown sugar to 1 pound of cinnamon). I like the richer taste that brown sugar gives this bread compared to white sugar. You may prefer white sugar. You may prefer more, or less, cinnamon. You may want to leave the cinnamon brown sugar mix out altogether to make this a simpler raisin bread. The goal is for you to make this your bread. If you use a cinnamon sugar mix, you'll need about 4 Tablespoons per loaf of bread.

Divide the dough into loaf sized pieces. In this case, 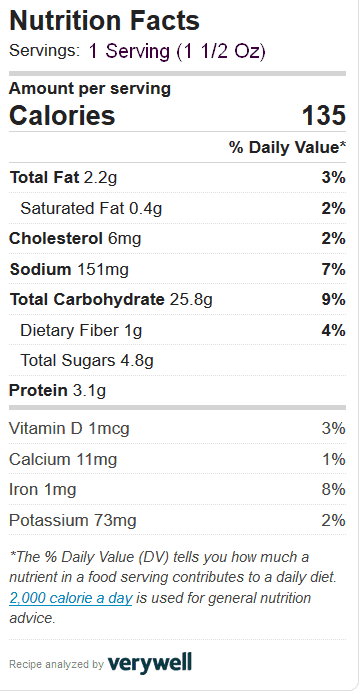 cut the dough into two loaves. Roll it out into a rectangle a bit wider than your bread pan, and about a foot long. Check which side of the dough looks best, and put that side down on the work surface.

Sprinkle the less attractive, now up, side with a fair amount of the cinnamon brown sugar mix. Leave the bottom 2 inches or so of the bread free of the mix. Spread the mix evenly from side to side, and then roll the top of the load down to the bottom. If you don't roll tightly enough, you'll have holes in your bread between the layers. Roll the dough so the seam is up. Pinch the seam shut. Roll the bread a bit more so the seam is down. Crimp the ends of the loaf, and put the loaf in a bread pan.  Repeat for the other loaf.

Allow the dough to rise until doubled. Then bake in a preheated 375F/190C oven for about 40 minutes.

The reason for adding the raisins either early or late relates to how the raisins will be distributed and their impact on dough development. If you add then early in a hand kneading, they will delay dough development. If you add them early in a mixer, the mixer will disintegrate the raisins. Adding them early in the stretch and fold does no harm and assures you they raisins will be evenly distributed. The quality of raisins is essential to the quality of this bread. I've been using organic flame raisins for a while. They are large and moist, and they are still moist when the read has been baked. If your raisins are dry, soak them in water or water and brandy for a while, then drain them. You may use the water in making the bread.