This is a hearty, and heart smart, seeded bread. Because it contains

flax seeds, it contains omega-3 fatty acids, which help elevate your good cholesterol. The bread is very tasty - a family favorite toasted for breakfast - and a whole lot cheaper than salmon, one of the other good sources for omega-3 fatty acids.

This recipe is modified a little from a recipe in Dr. Ed Wood's second book, "Classic Sourdoughs : A Home Baker's Handbook". While I really liked his

earlier book, "World Sourdoughs from Antiquity" better, this is a very good book, and I really like some of the recipes in it.

This was a favorite bread for our customers and it always sold out.  We liked 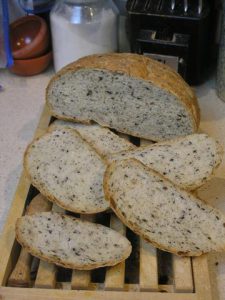 it too because the recipe is so forgiving - if our starter was having issues and no other bread worked well, this one did.  Was it the flax seed meal?  Was it the large amount of fresh starter?  We don't know.  However, because of the large amount of fresh starter, this bread rose quickly and usually didn't taste "like sourdough".  It was fresh and sweet.

This bread works well as a free-form loaf, such as the boule to the right, or as a pan loaf as seen above.

I like to start by preparing the toasted seed mixture.  By toasting them at the start, they'll be cool by the time I need them.  As always, I encourage you to change the seed mixture to make you happy,to make this your bread!

Put the sunflower seeds, flax seeds, and poppy seeds in a hot, clean, dry skillet and stir them. Let them roast, with frequent stirrings, until they become fragrant. Be careful to make sure they don't scorch! Toasting the seeds makes them - and the bread - much more tasty. You may also roast the seeds in a 375F oven for 5 to 10 minutes.  Don't add them to the dough until they are cooled and called for in the recipe as the seeds can interfere with dough development.

For kneaders - If you are measuring with cups, add all the ingredients but the flour and toasted seed mixture to your mixing bowl.  Then stir in the flour one cup at a time until the dough is too thick to stir.

Once the dough is well kneaded, add the toasted seed mixture and knead until the seeds are well distributed.  Then turn it out into an oiled bowl, turn and cover. Let it rise until doubled.

For stretch and folders - Put all the ingredients (including the

toasted seed mixture) into your mixing bowl, mix together until all the flour is wet.  Cover the dough and let it rest.  Because the stretch and fold method is so gentle, the seeds won't interfere with the dough development.

All together now - Whether you kneaded or stretched and folded, deflate the dough, knead briefly, cut and shape into two rough loaves. Let the dough sit, covered, for 30 minutes, then shape into final loaves. Let rise, covered, until doubled.

(1) The original recipe called for Flax flour. None was available here, so I used Flax meal, which is available. Check your local health food store and use what's available. Like any other whole grain meal or flour, Flax meal or flax flour can become rancid, so storing them in the refrigerator or freezer is suggested.

(2) Flax seeds are easily found in health food stores. The oils in them can become rancid, so either buy just what you need, or store the seeds in the refrigerator or freezer.