Where we bought it: Gunnison Vitamin Shop

Interesting Vendor Story: Bob's Red Mill is one of the long-time organic whole food type flour mills. Bob's Red Mill has a big following, and I thought it would a good idea to check it out. According to their web page, "Unbleached White Flour is freshly milled from U.S. #1 dark northern organic hard red spring wheat. Both the bran and the germ have been removed leaving the endosperm that is made into white flour. Regular unbleached white flour is enriched to government specifications and is unbromated. This is the same high protein flour used by professional bakers and produces high, well-textured loaves of bread."

Our first impressions: It handled very nicely, and it tasted good.

Any special reason we're testing this flour: It was time to test an organic flour and Bob's is said to be a good one.

How'd we screw up the tests this time? This was the first time in a while we fell on our face. Sadly, the next few tests all have problems. I managed to forget to do the hydration pictures, and the cover for the Simple Sourdough Pan Bread touched the bread, and when the cover was removed, the loaf partially collapsed. I've been looking for another sack so I can take the hydration pictures and re-do the failed loaf.

Conclusions: It's a good flour, it handled nicely, the bread tasted good, and it was pricey, though not as expensive as the spelt flour, and we still aren't sure it's THAT good.

dry which caused the top crust to separate. This is

was disappointing, but the bread was quite nice despite this flaw. The aroma was rich with strong caraway with a nice rye smell too. The crust was thick and chewy, with a nice caramel taste. The crust was tight and irregular, which had a wonderfully rich taste filled with caraway, rye, wheat, and sour. The Bob's Red Mill Organic flour got out of the way of the rye and let the rich rye taste come out. It had a big, mouth filling, taste, a nice rise. YUMMY!!

Ciabatta is one of our favorite breads, so we

always look forward to trying each ciabatta we make. This one was no disappointment, with a nice sour aroma, a nicely browned crust, and a lovely open crumb. The bread was very nice, very light, and had a long taste that delightfully stayed with us.

messed up. The bread rose far enough that it touched the Quick Wrap that covered the loaf. Sadly, the dough stuck, and when we removed the Quick Wrap, the loaf partially collapsed. It had risen nicely, so we mourned the loaf's loss. Well... maybe we didn't mourn. Maybe we were just ticked. On the other hand, the top of the bread DID look interesting. The bread had a nice fairly strong sour aroma, with a good underlying wheat smell. The crust was nicely browned in places. We think it would have browned nicely if it hadn't fallen. Browning is a consistent problem with this bread because of its long, long rise time which reduces the available sugars in the dough. The crumb was nicely irregular and open, and had a good sour taste. The crumb was very nicely soft and resilient. The bottom crust was nicely crisp with a hint of caramel taste. It had a good wheat taste, and was very, very nice.

and downs for us, but this time it 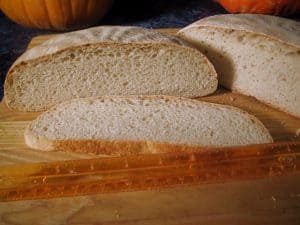 was great! The slices had an unusually strong sour smell. The crust had a nice dark color. The crust was nicely open, especially at the top of the slice. The crust was crisp, with a good wheaty taste. Perhaps we should have baked the bread a little longer as there was no caramel taste in the crust. Still, the crumb was soft and resilient, and this was a very nice version of this bread.

Hydration Pictures As discussed above, we messed up and didn't take the pictures. The next time we see this flour, we'll get some and remember to do this. Sorry gang... (then again, let's be honest, it's been over 10 years with no update.  I wouldn't bet on it happening....)