I was curious about the breakfast the Embassy suites served, and I really wanted to have breakfast with Beth, my better half. So, I had an omelette at the Embassy Suites and then headed off to Camp Bread where I had some coffee and a few pastries with fellow campers. The breakfast at the Embassy Suites was very nice. A good assortment of fresh fruit, nice (but far from stellar) baked goods, omelettes, juices and more. A good way to start the day, if you aren't on your way to something better.

On the way in to the mess hall, I noticed that Dan Wing had gotten a lot done on the masonry oven for his class, and Kiko Denzer had already fired up his mud oven. I had REALLY wanted to take one of

their classes, but there were so many classes and so little time. Both Dan and Kiko were building their ovens in the parking lot and we campers were encouraged to view their progress. When I asked him, Dan said he hoped to burn some largely ceremonial newspaper in the oven he was building. A mud, or earth, oven like Kiko's is a lot faster and cheaper to build than a masonry oven like Dan's. It would be interesting to find out how they last, and, if built well, how they compare in regards to thermal efficiency. A massive masonry

oven is the most fuel efficient way to bake bread - some ovens get 7 or 8 bakes from a single firing. I suspect that most mud ovens aren't built with as much mass, so they would deliver fewer bakes per firing. On the other hand, that may well meet a home baker's needs better than a massive masonry oven.

After looking at the ovens in the parking lit it was almost ironic that my first morning class was the "Getting to know your oven" class with Michele Suas. It was informative and depressing. He covered all sorts of ovens. Just not the convection ovens that I am stuck using because they are in the rented kitchen I am using. When Michel asked for questions, I asked how to make the convection ovens work better, more evenly. Michele's advice was that I sell lots of bread and buy some decent ovens. *sigh* I was hoping for a silver bullet. Of course, when you look at rack ovens, they are all convection ovens... but they have more control options than the smaller convection ovens I am using. Michele gave lots of great troubleshooting advice and warned us to

not mess with some parts of the oven, like the air flow control louvers in rack ovens unless we really had to.

After the morning class, it was time for lunch, which was again catered by Artisan Bakers.

In the afternoon, it was time to go to the lecture portion of Jeff Hamelman's Rye 101 class. Lots of things that had been troubling me about rye were explained. Jeff is an excellent teacher, and if you have the opportunity to take one of his classes, at Camp Bread, at the King Arthur school in Vermont, through the King

Arthur traveling classes, or wherever.... jump at the opportunity. The big issues are that rye has very poor gluten, that the gluten cannot be well developed. Rye has a starch called a pentosan, and acidifying the rye flour with sourdough starter will cause the pentosans to gelatinize and they will then trap gas in much the same manner as gluten. However, pentosans are not as effective as gluten, and a loaf of rye

bread is constantly losing gas. So, when a loaf reaches its peak, it MUST go in the oven at once. It must not wait for an oven.... with wheat breads, you can delay putting a loaf into the oven for as long as an hour. Not so with rye. If it's not rising, it's collapsing.

Near the end of the class, we went to the lab where we refreshed the rye starters we'd need the next day to make rye breads and created a number of soakers. 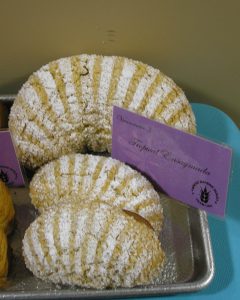 and get more tender. One soaker was not a real surprise. It was flax seeds. Some people soak seeds, some people roast them. I've been more a roaster than a soaker.... but now I'll have to play with both techniques. The surprise soaker was - cut up rye bread from an earlier bake. Evidently old German and Jewish bakers use old rye breads soaked in water to add flavor and moisture to their breads.

Jeff again surprised us. There was a temperature controlled proofer available, but he declined to use it. He asked Brian Wood if it would get hotter or cooler overnight, and then suggested putting the starters fairly near the ovens since the night would get cooler in the SFBI labs. He commented that if it had been too warm, he would have put the starter containers on the floor so the cool concrete would keep the starters cooler. He also adjusted the amount of seed culture in the starters he made to allow for the ambient temperatures. "If it's warm, use less seed culture. If it's cool, use more. Just feel your Zen and go by feel. You'll be close enough."

For a fairly, perhaps excessively, measurement oriented guy like me, it was somewhat of a shock to hear a world-class baker suggest just doing things by feel and by hunch. Maybe I need to be a bit less retentive. On the other hand, it is hard to duplicate something you didn't measure in the first place.

At the end of the day, the breads that had been made by the different classes were on display, and they were very, very good.

Monday evening was the big reception. Il Fornaio, a local Italian caterer, donated the meal to the guild - a generosity that just stuns me! It started with drinks and hors devours. Little bits of savory meats or cheeses arrayed on nice rye breads. Cheese stuffed and walnut topped figs wrapped in prosciutto. Mushrooms filled with neat stuff. Mussels that had been removed from their shells and mixed with something that vaguely resembled corned beef hash, and then put back into the shells. The only sad thing for beer lovers was they only had two beers, Beck's Lager in green bottles and Pabst in cans. They had a nice assortment of wines, but the beer selection was unimaginative. And this in San Francisco, the home of Anchor Steam Beer.

Two of the campers, Miyuki and Juliet, made centerpieces for the tables. They

were all made with bread or dead dough (an unleavened dough used for artistic purposes - when baked, it feels a lot like wood). Each of them was covered with many small replicas of different baked goods. Each was different. Each looked like a modern sculpture. Each was beautiful. Each one had a blackboard (made of dough) that had a nice food - especially bread - related 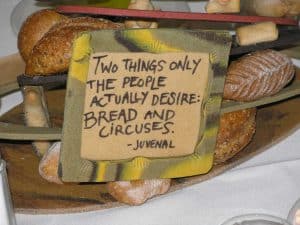 saying on it. There was a wide variety of sayings. One of my favorites was, "The dog isn't wagging his tail for you, but for your bread." I got pictures of most of the sayings because I wanted to use them in my bakery email signature file, but - like an idiot - somehow didn't get a picture of a whole sculpture. I've winnowed through the pictures and found a two that give a taste of what the centerpiece sculptures were like.  (The sayings are many of the random quotes in the upper right of each page here at Sourdough Home.)

The dinner consisted of a marvelous looking steak, a very tasty grilled swordfish fillet, or a vegetarian lasagna that the vegetarians at our table said was very nice. Dessert was a nice, but not terribly inspired (or inspiring) cake imbibed with a liqueur and served with pastry cream. Perhaps we should have stayed for the dance, but Beth and I both have trouble with loud music so we thought it would be better to bail out early. It was a great evening, a chance to dine rather than just eat, and another chance to socialize with people from around the country.