The more observant subscribers may be wondering why a second Mike's (more or less) Weekly Baking Tips newsletter is coming out the day after the last one.  The VERY observant subscribers will note that the one that made it to you yesterday was dated 2019-11-10.  In an age of electronic communications, having an email take 6 days to be delivered seems, at the least, odd and more likely just plain wrong.  And the story behind it is a story of mental anguish.

The condensed version of the story is that the MailPoet software stopped working after having worked just long enough to send one newsletter.  The new newsletter just sat in the send queue.  Waiting.  And waiting.  Pleas for help from our hosting service were met with ineffectual bleating.  The MailPoet staff told us they'd had issues with our hosting service in the past.  After almost a week of spinning my wheels, I was left in "Survivor" mode where someone would have to be voted off the island - either MailPoet or my hosting service.  (As an aside, if you are a contest winner and haven't heard from me, it was because my attention was focused elsewhere - you should get emails from me today.)

Despite having been happy with my hosting service, the quality of their support has been slipping and they raised their prices every time we renewed.  There was money to be saved by moving to a new hosting service.  So, I searched for a new hosting service, landed with HostPapa and they migrated all my websites from the old service to theirs.  And with about an hour of trying to make it work, MailPoet started sending emails.  Including the newsletter that had been in limbo for 6 days.  It felt SO good to see the emails flow!

I was reluctant to set up the email lists for the cookbook customers for fear the issues were MailPoet issues and MailPoet would have to be voted off the island.  Now that I know it works, I'll start setting up Easy Digital Download accounts for our older cookbook customers.  We'll send emails to them when the accounts are set up.  We'll start with the smaller lists, and move to the bigger ones.

Are we going to accidentally talk about baking this time?  Yeah, why the heck not?

Last time I mentioned that Beth had bought a copy of "Poilâne: The Secrets of the World-Famous Bread Bakery" by Apollonia Poilâne and that I wasn't completely thrilled with the book, but that I'd give the big recipe in the book for Poilâne's signature miche a try.  I didn't make a starter from yogurt, I fed my existing starter at the hydration she used, about 57%, which is a rather dry starter.  The recipe used King Arthur's Sir Galahad flour, some freshly milled Rouge de Bourdeaux whole wheat flour, salt, the starter, water and yeast.  Yeah, yeast.

Once risen, I baked it in a wood fired oven at Bread Stone Ovens. 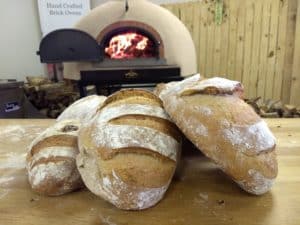 I love their ovens and wish we had room for one.  The picture to the right shows a bake there and one of their ovens in the background.

Getting back to the Poilâne breads, to the left is a crumb shot of the walnut bread.   The crumb was very tight and dense, and the flavor was, in a word, bland.  The bread was better the second day with the Rouge de Bordeaux opening up and showing some of what it could do.  If I were to make this again, I'd make the dough wetter and might increase the yeast to get more rise.  Apollonia suggested adding some toasted walnuts to some of the dough to make a sourdough walnut bread.  It was a waste of walnuts.  Overall, I much prefer our simple sourdough walnut bread.

I was excited about one of the sandwiches in the book, it was a goat

cheese, sliced radish and roe sandwich.  I made it with two kinds of roe (sweetfish and salmon), and it didn't really work for me.  The tastes were fighting each other and didn't work together. The smaller sweetfish roe was more pleasant than the larger and redder salmon roe, but, either way, it still didn't quite work.  And I like all the ingredients.  Still, I'm not giving up in the book or the recipes.  The rest of the roe will go into omelets this morning.  (Two asides - the sandwich looked better in real live, and the omelets were great!)

I'll probably try her recipes again, but so far I am not terribly impressed, I am willing to consider the notion the problem lies with me rather than the recipes.

If you've tried any recipes from the book, please share your comments below.

Until next time, may your dough always rise, even if you used sourdough and yeast!