A quick apology. Friend of the newsletter, Dennis McCanna had some trouble replying to the last email I sent out. But, he persevered and together we unraveled a long standing issue. When we changed ISP's we had to change our email addresses from mail.otherwhen.com to just otherwhen.com. We thought we'd changed all of the references to the old email address. We hadn't. There was one more place at MailChimp to change. This week, thanks to Dennis, replying to this email should get to me. I haven't been ignoring your emails, I've been not receiving them. And that ends now, thanks to Dennis!

It's been a few weeks since my last missive. In those weeks I've converted the BakeWithMike web site to WordPress. The conversion went well and the Bake With Mike site now has a cleaner look and is much easier to maintain. The conversion has been in the works, though backburnered, for years. Finally, things fell in place and the conversion took about 4 days of work. That's not bad for a newbie!

That led to starting the long delayed Sourdoughhome conversion. This conversion will not be a 4 day exercise. If it is done by the end of September, I'll be delighted. We worked hard to make Sourdoughhome a very rich web site with lots of cross linking. Almost any technical term you might not be familiar with is a link to a page that explains it. That richness took years to develop and it also means that the conversion will take a while. Still, the new site is looking very nice, so I have hopes. I'll keep you posted about our progress. How's the conversion going, you ask? Well enough that the annoyances of coding plain old fashioned web page HTML for this newsletter were much more annoying than usual. Point and click, drag and drop and a good user interface are really pretty neat!  (Note from November, 2019 - all the conversion is done, except for the blog, which is underway!)

In the last exciting post, I mentioned that I needed 2,500 grams of starter Friday morning. I didn't mention that was so I could make a bunch of Seeded Lavash Crackers to sell at a special event at a local beer bar. This was possible because of recent changes to the Texas Cottage Food laws that expanded where a cottage food maker may sell. Only, the day before the bake I realized the change took effect on September 1st, and the event was in August. I couldn't legally sell at the beer bar event! The good part was that the only part of the prep I'd done was to make the starter. I'd have hated to have had 8 to 10 pounds of Lavash crackers baked with no where to go!

Still, this was disheartening. I'd done the last feeding to get it up to 2,500 grams of starter, and once fed the Cambro container was just under 1/2 full. In the morning, it was just under full. If I'd been a sensible person, I'd have added the starter to the discard starter container in the fridge. But then I wouldn't have this tale of woe to share.

We had some errands to run, so I looked at the starter, slid a sheet pan under the Cambro container and out of the house we went. Since the starter had already doubled, plus a little bit, I thought it would be OK until we got home - surely it wasn't going to rise much more! (Famous last words!) If you're not familiar with them, Cambro makes a line of polystyrene kitchen containers that are food safe and have matching lids. The lids seem to fit loosely, so I've always assumed they didn't seal well. And, for sourdough, that's fine, you want the gas to escape.

One errand turned into another, and another, a lunch out on the town and a visit to a grocery store. If you live in the Denton, Tx area, I highly recommend Gyro 360. Their gyros and sandwiches are great, but their fries are just amazing! Most restaurants sell pale, greasy, limp potato things and call them fries. Gyro 360 sells crisp, nicely browned and not at all greasy examples of what fries could be if the restaurant cared at all. You can get them plain, covered with feta and a sauce, or covered with gyro meat. I like them all, but the plain fries are really a show stopper. If you're close, go. If you let me know you're going, you could invite me to join you. I love meeting people who like my notes. And now if you reply to this email, I should see your email! (In case you're concerned, this was an unpaid endorsement, I just love that place!)

Eventually, we got home. I dropped the groceries we'd bought on a counter. As I walked into the kitchen I saw something odd on the stove - a white disk in the middle of my cast iron skillet. I didn't remember leaving anything in the skillet, but I had a dog to let out to "do her business" so I mentally filed that away as something to look into later.

Once back in the house I noticed the counter a bit to the right of where I'd dropped the groceries was covered in sourdough starter! It had missed the sheet pan and blown past it! The white thing in the skillet? It was the lid to the Cambro container, blown almost 11 feet across the kitchen and landing in the skillet with an accuracy an artillery officer might envy. Gee, I guess Cambro containers seal better than I thought!

To the left is the scene of carnage that caught my eye.Yeah, I KNOW I just said this, but it amazes me how the starter just blew past the sheet pan to go onto the counter top!

More amazing was the blast radius! 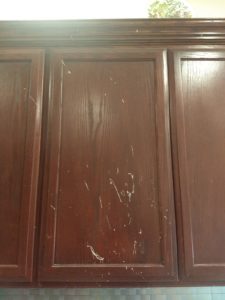 WOW! A learning experience! SO many lessons!

Well, until next time, may your starter always rise, but hopefully not all over the place!