This question comes up fairly often. If you watch old movies or TV shows, the answer is obvious. 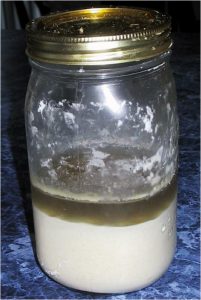 Hooch is cheap, bad booze. And, even in sourdough circles, that's pretty close to true

There's a great example of sourdough hooch to the right. It was taken in 2001 when I knew much, much less about sourdough than I do now. In sourdough, hooch is a light liquid that is thrown off by a sourdough starter. Since sourdough starters have yeast in them, and since yeast produces alcohol, there is some alcohol in hooch, but you have to be pretty hard up for a drink to even consider drinking hooch.

Yeah, but why does it happen?

Hooch is formed and thrown off when a starter is fed too little, and too infrequently. I usually see it in thin starters, such as the ones fed with a cup of flour and a cup of water. This starter has a hydration of around 166%. This means that there isn't much food (flour) in the starter compared to a thicker starter. The starter eats the food and slows down. And then it throws off hooch.Thin starters, or starters which are fed less frequently, tend to throw off hooch more often than thicker starters, or starters which are fed more frequently. I see hooch as presumptive evidence of starter abuse. Brewers have done work looking at yeast that has been starved. It deforms. And it takes many generations for the yeast to become fully healthy again. I haven't seen similar work with sourdough starter, but I am a believer in the industrial engineer mantra, "it takes a consistent process to make a consistent product". When you abuse your starter, you are short-changing your bread. You might look at my sourdough primers on Maintaining a Starter, storing a starter, or reviving a starter.

For a number of reasons, I suggest that people keep their starter at 100% hydration, that is one part flour to one part of water by weight. The starter works more slowly than a thinner starter. So, you don't get into starter emergencies as quickly. This protects the sourdough beginner. Also, you have a great indicator of starter activity - if the starter can double in size between feedings, it is ready to use. Neither thicker nor thinner starters offer that indicator. Thicker starters can be difficult for a beginner to work with. Feeding a thicker starter can involve kneading more than mixing.

But, whaddya DO about it?

If you have just a bit, stir it in, feed the starter and keep going. If you have a lot, like an inch in a quart jar, pour it off, replace it with water, and then feed the starter. You can prevent hooch by keeping your starter fed well and often.

Having said that, there is a time I suggest a thicker starter, and that is when you are storing your starter. A storage starter has

special needs. I store my starter at about 60% hydration. That is 100 parts of flour to 60 parts of water by weight. I'd be embarrassed to admit how long I've kept that sort of starter in the fridge and had it revive.

This starter was last fed on 9/11/14 and immediately refrigerated. The top of the starter was where the top of the tape is. The picture was taken today, 9/21/14. As you can see, the starter has pretty much doubled in size, despite being refrigerated. Many bakers feel a thicker starter has more vitality than a thinner starter, though not as much sour.

When I want to use a starter, I take some out of this jar and feed it at 100% hydration for several days. So far, this starter has been with me about three years.

When the starter takes more than two days to revive, I feed it until it is very lively, then switch it to the lower hydration and replace what is still in the jar. It takes about 500 grams of starter to half-fill this quart sized canning jar. Again, we won't talk about how long some of the thick starters have been stored. So, let's just say months. And no hooch.