I can't believe I've never shared this recipe!  Though it is a bit

of a bother and has caused "issues".  It kinda reminds me of a line in The Beatles song about desserts, "Savoy Truffle" where they sing, "But you'll have to have them all pulled out after the Savoy Truffle!"  Yeah, it's THAT sweet!

This recipe is based on a recipe in Bernard Clayton's wonderful book, “Small Breads.” I converted it to use sourdough and to work at higher altitudes. These cinnamon rolls are addictive, more addictive than any mere sticky bun.

While we were testing this recipe, I gave it to two people. One made it the way I gave it to him. He gave some to a lady-friend who said that I had to be in league with the devil to make something so rich and seductive (not guilty!) The other decided that the recipe called for too much butter, too much cinnamon, too much brown sugar and made all sorts of heart and weight conscious changes. He then complained the recipe was for hockey pucks. Of course, he had changed the recipe into one for hockey pucks. Personally, I like cinnamon rolls more than hockey pucks, so please try it the way it's written, at least once.  This recipe makes 12 very large rolls.

Let's start with the dough ingredients:

You may develop this dough by machine, kneading by hand, or stretch and fold - all work very well with no adjustments needed to the recipe.  When the dough is developed, cover it with clingwrap and allow it to rise until doubled in size.  I prefer to use whole milk at room temperature.  Cold milk slows the rise, and using skimmed milk won't turn this into a health food, though it will cause you to lose out on some of the flavor.

While the dough is rising, measure, mix and set aside the Cinnamon Sugar mix.  As a hint, use a GOOD flavorful and aromatic cinnamon.  If you don't know what I mean, go to a spice shop and sniff some of the good stuff.  The stuff in grocery stores can be quite old and dull.

Next, measure, mix and set aside the nut and fruit mix:

The last bit of prep work is to melt some butter and set it aside to cool.  You might do this an hour or so after you let the dough start rising.

After the dough rises, it's time to make the rolls!

It is worth re-emphasizing, when you're ready to bake, put the pan on a sheet pan. There is so much sugary filling in these rolls that the filling will bubble up, over and out. The pan will catch it. Otherwise, the goo will hit the floor of the oven and catch on fire. (Don't ask how I know this.)

Bake at 350F about 35 minutes, until the rolls are 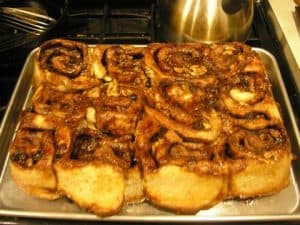 browned and the filling is bubbly. If you don't bake it long enough, the filling will be granular rather than gooey, like a sugar candy that hasn't been cooked enough.

However, the rolls may be too large to fit well into the wells and have room to rise. If you put too large a roll into a cupcake pan, it will mushroom and I think that's less attractive than a more uniform roll. One way of handling this is to cut the 20" side of the rolled dough into two 10" segments, or even three 6 2/3" segments. However, this will reduce how many layers there are in your roll. This isn't "right" or "wrong", it's just a matter of taste.

Or you can cut the 24" length into manageable segments and then roll them out to a greater length, the way you rolled out modelling clay "snakes" in grade school. This keeps the number of layers the same, but makes them thinner.

As with the rolls in a baking pan, you need a sheet pan under the cupcake pan, and need to use a second pan to help you flip the rolls over.

Serve with milk. Lots of cold milk. Coffee is optional. And remember to brush your teeth afterwards.