This note picks up where the Three Stage French Bread (Pain au levain) note left off. If you haven't read it, I encourage you to do so now.

At the end of the previous note, I was left with a bread that was quite, quite dense, 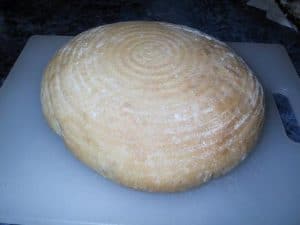 not terribly flavorful, and the intermediate starters had been only slightly easier to work with than wood putty. And I wasn't sure how much of it was supposed to be that way. Was it the recipe, or was it the starter?

The answer was obvious. RUN AN EXPERIMENT!!! So, I repeated the process with a different starter. Instead of the Sourdoughs International San Francisco starter, I used a starter I cultured here from rye flour. It is an active and flavorful starter, and my current favorite. In order to test my theories about hydration, I also did a third batch that used a higher hydration level at every stage of the process. (To make life easier for all concerned, I changed the spreadsheet so you can customise the process considerably. )

Scott and Wing in "The Bread Builders" indicate that a more liquid starter will tend to sour more than a drier one. Certainly, a more liquid dough would be easier to handle, at least up to a point, than the dough I dealt with last time. The chart below details my observations. Sadly, the loaves went off to a formal dinner I was arranging, so I couldn't cut them open before they went off to the dinner, and there just wasn't time to photograph them before the dinner. (And, yes, I was concerned that the people there might look at me like I was a loon if I started photographing the bread.)

Now that the smoke has cleared, there aren't any big surprises here. Switching starters DID make a difference. Sourdoughs International's San Francisco sourdough starter is outa here. Increasing the hydration of the intermediate stages of the dough let the taste develop more fully, and increasing the hydration of the final stage allowed me to make a lighter bread. Of course, whether it was an authentic Pain au levain is another question.

Given some comments I've gotten from people very familiar with classic French breads, my experiment here has probably reduced the authenticity of this bread, and suggests that I really shouldn't call it a Pain au Levain any longer. It is now more like a typical American sourdough.