This is a stunning sourdough English Muffin recipe which has been on this site for years.  We've just taken another shot at it to clarify instructions and measurements.  The taste of these muffins is awesome! My son, who was about 10 when we first made these and who didn't like English Muffins, had three of them for breakfast. The next day we made Eggs Benedict, and he announced he liked the English Muffins better 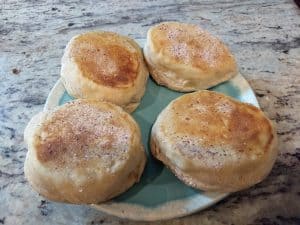 "without all that stuff on them".  He is now 31 and in a recent conversation commented that an English Miuffin dresses up any breakfast.  See - they DO grow up!

The picture we used to have here showed some sadly burned English Muffins.  In later years, I've learned that you don't have to turn the skillet up to forest fire strength to cook the muffins!  Now, I'm using more reasonable temperatures.  More on that below.   The home made ones are SO much better than the store bought!  We are quite sad when we run out.

This started as a recipe from: Bake Your Own Bread By Stan & Floss Dworkin and should make about a dozen English muffins, depending on how large a muffin you cut out of the dough.

Most of the work is done the night before, so you can probably serve (or just eat) these about 2 hours after you get started on the second part.

Mix starter, honey and milk in mixing bowl until smooth. Add the flour, 2 C at a time, and mix in. There's no need for gluten development now, so do not whip-just get all the flour thoroughly wet. Cover with clean towel and leave at room temperature in a draft free place.

The Next Morning:  Sprinkle:

On top of the starter that you allowed to rise overnight.

Stir down mixture from last night (it will have risen considerably), mixing in the baking soda and salt you just sprinkled on the starter.  If the starter rose too high and fell, that's not a problem, just stir down the rest of the way.

Now you need to add:

Flour your work surface with the flour (you may use twice as much as listed, if needed) and knead until the dough is medium stiff - enough to roll out. Once you have enough flour in (I go by feel-never too dry and always moist) and the dough no longer sticks to your hands, give it another 5 minute kneading.

Line 2 baking sheets or jelly roll pans with baker's parchment and then generously sprinkle with corn meal.  The corn meal is essential to keep the muffins from sticking.  so be generous!

Flour your work surface again and lightly roll dough to

about 1/2-inch thick. Take a 3 inch round cutter (a bit larger diameter and different shapes are OK) and cut as many rounds as you can.  As you cut the rounds, transfer them to the sheet pans. We tried cutting as many as we could and then transferring them, but we tended to mangle the muffins.  Don't twist the muffin cutter as that will make them lopsided.  The best bet is to move the cutter in a circle to separate the muffin from the dough mass.

Roll the left over dough out and cut more until the dough is all used up. Try to keep them very uniform in thickness and diameter.

Again, as you cut each round, place on the bakers parchment which has been sprinkled with corn meal - don't allow raw muffins to touch- they WILL stick to each other. When all rounds are cut, sprinkle corn meal over tops of muffins.  Cover each pan with cling wrap to keep the dough from drying out.

Allow to rise in warm place, covered, for about an hour or until risen again.  This is a great place to do any other breakfast preparations, or go take the shower you put off so you could start making the muffins for breakfast.

Now Comes The FUN Part!  Preheat a griddle - I like a non-stick electric griddle for this - and grease it with with a TINY bit of butter, until butter sizzles. With our electric griddle, I used 300 and 325F (150 and 163C)   If you are using a skillet or griddle on a gas range, use a low flame.

The idea is to set the heat so the inside of the muffin bakes and outside does not burn but browns nicely. Cook one side for about 4 to 5 minutes and turn.

Some people suggest squishing the muffin down a bit with a spatula after flipping it - but I don't think that's a good idea.  Try doing it and not doing it and see which you prefer.

In any case, cook the flipped side for about 4 to 5 minutes. If you can manage this, turn only once so try to be sure the one side is cooked before turning. While you can skip the butter if you have a non-stick skillet, they won't taste as good without it!

As the muffin cooks, you might gently press on it with a finger to see if it is done.  If the side pushes out like a thick liquid, it's not done.  You may need to play with the time and temperature to get them where you want them.  Remember, an English muffin should be underdone a bit so they can finish cooking in a toaster or a skillet swimming in butter. It takes practice to nail it.

Also remember the thermostat on griddle may not be all that accurate.  You may need to play with the time and temperature to make the English Muffins you want.

While the muffins taste great, they don't have the texture I usually associate with English Muffins - no big holes. I figure, maybe it's me, so I'm still working on it.  A number of emails in regards to this recipe say, "don't be in a hurry, let the muffins rise a bit longer and you'll get the big holes you're looking for!" Another message I received was from an English lady who told me that in England the muffins don't have holes as large as I seem to be expecting, so the muffins are probably right on target.  A friend warns me to NEVER, EVER cut the muffins with a knife!  They must be separated into two halves using a fork.  I've done it both ways and (sorry Freddy) don't see any real difference.