When I was running my bakeries, I called this "Black Canyon Sourdough" and it was quite popular. I thought it was a San Francisco Style Sourdough bread, however reading Dr. Sugihara's papers has shown me it really isn't. When I redo the site, I'll redo this page 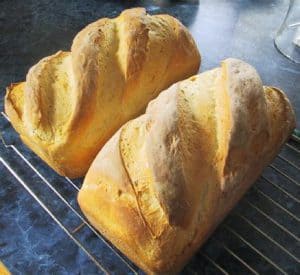 In any case, you can make this bread at home. The bread can be made in many shapes, depending on your desires and tastes. The more surface area your bread has, the faster it will go stale. A round loaf or pan loaf will last the best, with a baguette lasting the least well.

Unlike most San Francisco sourdough recipes I've seen, I use part whole wheat flour. It makes the bread more interesting in color, texture, and taste. Adding the whole wheat flour also makes the flour more like what I've been told French flour is like.  This is a very simple bread. While it's not in the ingredient list below, the real main ingredient is time - it will take 12 to 15 hours to rise. Let's start with the ingredients for two 1.5 lb (680 gram) loaves:

If you are measuring by weight, which we strongly encourage,

weigh the ingredients into your mixing bowl in the order given. Stir until well mixed. You may knead by hand or machine, as detailed below.

If you are measuring with cups, start by measuring the starter you'll need. Whisk the starter before measuring it, so you'll be measuring starter, not bubbles. Then whisk in the water, the whole wheat flour, and then the salt. Set aside the whisk, and get a wooden spoon. Add the 3/4 of the bread flour called for, about 4 cups, and stir it into the mixing bowl. Add more white bread flour a bit at a time, stirring as you go, until the dough is too stiff to mix by hand.

To knead by hand, pour the dough out onto your lightly floured kneading surface. Knead the dough for 5 minutes, cover it and it let rest for another 5 minutes. Then knead for 5 more minutes. At this point, it should be resilient, springy, and pass the windowpane test.

Once the bread is kneaded, let it rest for 30 minutes. Then divide the dough into two 770 gram dough balls. You may recall, from the top of this page, that we are making 680 gram loaves. The added weight is to allow for weight loss in baking. Loaves tend to lose about 10% of their weight in the oven, and my goal was to make a finished loaf that is close to 1 1/2 pounds. This is very important if you are selling bread and including the weight of the loaf on the label.  Now form the dough into batards, boules, or pan loaves. Cover the loaves and let them rise at room temperature until doubled in size, probably about 12 to 15 hours.

Once the loaves have doubled in size, it's time to preheat the oven to 375F/190C. Once the oven is at the right temperature - I use a thermometer to be SURE the oven is at the right temperature - slash the loaves with a razor blade, slide them into the oven, and put some water into a pan at the bottom of the oven. Allow to bake 45 minutes, or until the inside of the bread reaches 205F/96C. (Note - when we were in the mountains of Colorado, with our kitchen at 7,703 feet above sea level, we baked to an internal temperature of 195F/90C.  At the altitude we lived at the boiling point of water was 198, so there was no way we could get the bread to 205F/96C!)  Since this bread has no sugar in it, you may bake it at higher temperatures - at least to 475F/246C which will give the crust a darker color.  You will need to reduce the bake time somewhat.  The goal of baking is to make the bread you like, not the bread my customers prefer!  If you like darker, make it darker!  If darker frightens you, make it lighter!

Remove from oven. If you used a bread pan, remove the bread from the bread pan. Now let the bread cool on wire racks before slicing - if your family will let you. I often vary this recipe by letting the bread rise once in a mixing bowl, punching it down, kneading it some more, and then forming loaves. The second rise takes about 1/2 as long as the first rise, and also adds to the flavor.