Where we bought it: the local grocery store - it's everywhere!

Protein content: 6.6 (no, that's not a typo or error - cake flour has low protein levels, in a cake gluten is a bad thing)

Any special reason we're testing this flour: Again and again, I've been told you just can't make good bread with cake flour. I took that as a challenge. Please note - this isn't supposed to be a bread flour. It's a cake flour, and I've made many fine cakes with it.

Some special comments - As you read this, please try to keep it down to about three "Doh"'s and two "WHAT WAS HE THINKING?"'s. Yeah, this was not one of the brighter things I've done, but I hadda do it. It was a challenge. Also, please understand that it IS a good flour - just not a good BREAD flour. If a sprinter enters a marathon, chances are the sprinter won't do well. The sprinter has trained to go like blazes for 100 yards, not to run for 26+ miles. That isn't to say a sprinter is "better" or "worse" than a marathon runner. They are both well trained athletes competing in demanding sports. Similarly, this flour was used for a purpose for which it was not intended or trained, and it did the best it could.

How'd we screw up the tests this time? Other than using a flour that was totally unsuited to bread making? It was pretty smooth sailing this time.

Conclusions: Tasteless. Bad crumb. They were right... it is, at best, difficult to make bread with cake flour.

Bohemian Rye The Bohemian Rye was picture looks like it had some oven spring. It didn't. It had oven spread. I didn't slash it... it just slid apart and looked like that. It's an attractive loaf. Perhaps the most attractive loaf in this test. The bread has a fairly open crumb with irregular small to medium sized holes. It is a dense bread with lots of caraway in its aroma. The bottom crust, despite being quite dark, is still soft and flexible and is free of the caramelization taste notes that usually accompany a dark crust. The crumb is very soft with a good rye and caraway taste. However, the bread, despite being baked to a good temperature, had a mouthfeel that made me think it hadn't been baked long enough. The crumb was quite moist. The crumb had a nice sour after-taste, though that was less noticeable in the first taste. While I won't throw it away, it won't be a favorite. How unfavorite? Well, this is the first time I didn't finish the test slice of bread. Perhaps I should have baked a cake instead. 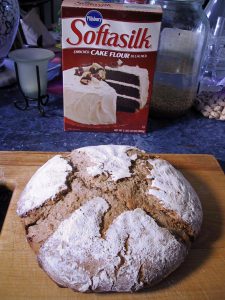 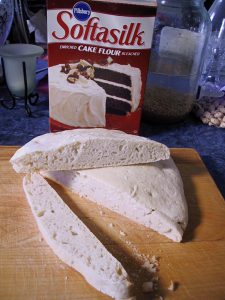 Ciabatta is usually one of my favorite breads. This time it was just weird. The very ends browned a bit, but the top and bottom were white. The top of the loaf had a very smooth/waxy look that made me think of a bad plastic toy that was in the sun too long and melted a bit. The crust was thin, somewhat crisp, and a bit chalky. The crumb was irregular with small to medium sized holes, and was fairly open. The crumb's aroma was largely sour with no wheat notes. The smell promised little, and that's what the crumb delivered. I usually dip ciabatta in olive oil. Not this time... it would have been a waste of good olive oil.

Simple Sourdough Pan Bread - I've made this bread many, many times, but I've never seen it come out so strange. The bread didn't brown at all. It was so white, it looked like it had been whitewashed. And when I sliced the bread, it fell apart. The words "cake-like crumb" come to mind. The aroma was very neutral with just a hint of sourdough presence. This is odd, as this is usually a very sour bread from aroma to taste. The crust was soft, thick, flexible and somewhat chewy. It was also white. It hadn't browned at all. The crumb was soft, somewhat chewy, and tight with very few and mostly small holes in it. The taste was an odd mixture of light wheat, sour, and chalk. Not a favorite. And, again, a slice I didn't finish.

Three stage French bread (or Pain au Levain)- While this bread didn't fall apart as much as the Simple Sourdough Pan Bread, there was a good bit of crust separation and the crumb was crumbly. Unlike the sourdough pan bread, there was some browning on this loaf. The crust was thick and chewy, with no crispness or caramelized flavor notes to it. The crumb was tight, soft, and dense with few holes. The crumb had a hint of sour taste to it, but little else in the way of flavor. You'll be amazed to read I didn't finish my slice.

Final conclusions - I've changed my mind. I AM throwing this away. Life is too short to eat bad bread. I only regret that I didn't make cakes with this flour. This test was a regrettable waste of good cake flour. What would I do differently next time? I could mix some vital wheat gluten, ascorbic acid, and malt extract with the cake flour. Or, I could just use a flour that was designed to make bread instead. Yeah, that last one, that sounds like a winner!  Honestly, it probably isn't fair to keep this flour test on line.

Hydration Pictures As discussed, we took pictures at 60, 80, and 100% hydration. The Softasilk doughs remained considerably wetter than most flours at all hydrations.