The classic KitchenAid Grain Mill is a steel wheel based grinder. It is an 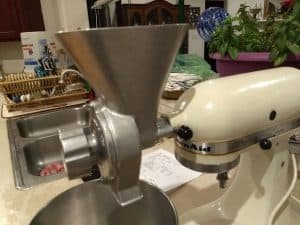 attachment for the popular KitchenAid mixers. To use it, you need to have a KitchenAid mixer or a mixer with a compatible power take off unit. This mill was one of the first fairly popular grain mills. It was responsible for many people getting into - and out of - grinding their own grain into flour. We'll examine it carefully to set the other mills into context and to see how good, or bad, it is.

The model I have is no longer being made. A new model is being sold with a list price of $149.00 and it is usually available for around $100.00. If KitchenAid sends me one, I'll update this review.

A quick note - this is a heavy all metal and somewhat klunky grain mill. It was, and is, made by KitcheAid. A more recent attachment for KitchenAid mixers has been released by MockMill. From all accounts the MockMill for the KitchenAid is much nicer - faster, quieter, putting less load on the mixer motor while making better flour.

Speaking of noise, this mill was, ironically, quieter than the WhisperMill. However, it's noise was lower in pitch and had more "grinding" noises in it. My wife paused the DVR while this mill was running, and often left the living room, which is adjacent to our kitchen, as the mill was just too noisy, even in the next room.

For years people have been grinding their grain twice with this mill. Once to crack it coarsely, a second pass to reduce it to flour. This is said to be easier on the mixer, to produce better flour and to actually be faster than milling in one pass. As is my usual practice, we ground the flour twice.

Now, let's look at particle sizes. Sadly, the KitchenAid milled no particles that passed through the 100grid screen. The flour was coarse and felt a lot like Graham flour.

Please note that there were losses due to flour stuck in the sieves.

The whole wheat and rye bread had the next to worst rise with the flour from the KitchenAid classic Grain Mill. However, the coarse grain helped the bread's flavor.

The rise on the whole wheat bread was relatively poor, as was the crumb structure. We could have improved this by adding vital wheat gluten, but we were interested in what the flour did on it's own.